An anonymous tipster warns investigative TV journalist Meredith Montgomery that a Bosnian Serb terrorist is walking the streets of Chicago. The informant fears that the man’s target is the Bosnian Muslims who have found refuge at the northside Islamic Community Center.
The FBI is not interested in an unconfirmed sighting of a man who committed war crimes twenty-five years ago, but Meredith feels there is a big story here. And a threat. It becomes her job to warn the public. But first she must uncover the facts.

She is not without baggage of her own—vulnerabilities and traumas that she is hesitant to reveal to the inscrutable research analyst, Aubrey Kettering, who teams up with her. Surprisingly, he discloses that he speaks Serbo-Croatian and has ties to the Serbian community. When Meredith’s life is threatened, he will not leave her side. The investigation carries them on a terrifying ride into the life and mind of Zoran Duric whom they fear is a ticking time bomb.

When the story leads them to Sarajevo, they barely escape with their lives. But their peril is only beginning. The twenty-five-year-old war is still simmering beneath the surface. Will its hatreds spill over into America?

As they dodge assassination attempts, Meredith and Aubrey forge a tight emotional bond. Despite the chaos around them, her heart is healing. Aubrey has long since fallen in love with her. But will they survive the danger that stalks them?

Also, as a special Christmas promotion, The Grenville Chronicles, a three-book boxed set is being offered at 99 cents for the month of December. 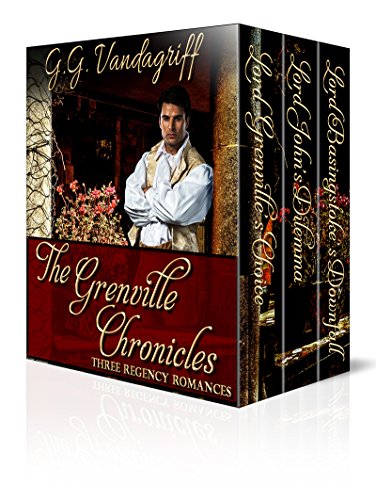 I am presently writing the next Regency romance in my Saunders Family Saga, about the irrepressible Arabella, tentatively titled Miss Saunders Takes the Waters. As the title implies, it takes place in Bath, England, where, since Roman times, English people had been going to partake of the mineral waters springing up there for their health. It became a social resort and is one of my favorite places to visit in England.

We made our regular Thanksgiving trek to California to see our daughter, Buffy, her husband, Allan, and her family of five children. Our daughter spent the three days before Thanksgiving cooking our wonderful feast. As we worked, we talked about family history and what it would have been like to live among our Pilgrim ancestors. We decided it would have been pretty grim!

We will be spending the Christmas holidays with our son, Morgan, and his family. Henry (5) has been helping me with the Christmas decorations. Warmest wishes for a Merry Christmas from our house to yours!