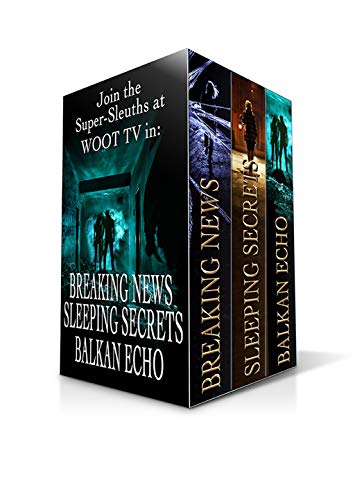 Meet the quirky, bold investigative journalists of Chicago’s superstation as they pursue stories throughout the US and Europe.

Started with a bang… Literally! Thankfully, I started this book after breakfast, it was hard to put down long enough to fix lunch. I finished it that afternoon.—Amazon Five Star Review

Paula James is on the run from crooked law enforcement and a powerful drug cartel. Going off the grid, she flees to David Van Pelt, an investigative journalist to whom she has had a secret attraction  for five years. Though he is engaged to another woman, he does not hesitate to help her. Soon they are jetting all over the country, staying one step ahead of their enemies. Their attraction grows, but so does their danger.

Suspense, romance and a story that never quits. Starting with a bag, as in a gun shot, the story moves on with Paula running for her life. . . “The action continues, and the story is well written, details not forgotten. I highly recommend this book!—Amazon Five Star Review

Action started on page one…I love that! This book had me on the edge of my seat.—Amazon Five Star Review.

I loved this mystery from the first page. The story and characters pulled me in immediately; and kept me reading.—Amazon Five Star Review

She didn’t know her name.

She didn’t remember her childhood.

And the man who was coming to tell her was just murdered.

Paula James recently found out that her whole family had been in Witness Protection since she was nine years old. Now both her parents are dead

, and she doesn’t even know why they had been hiding in the Missouri wilderness ever since she could remember.

[Sleeping Secrets] takes off the minute you start reading, right where it left off in “Breaking News “. It’s fast paced, suspenseful, has tons of twists and turns, and a surprise ending you won’t soon forget!!! We also get to see Paula and her David’s relationship develop. I loved this book,whether Vandagriff is romance/suspense or Regency romance her books are fantastic! I’ve read her for years and will continue to do so!”—Amazon Five Star Review

This book had me from the beginning. I couldn’t put it down.—Amazon Five Star Review.

, the FBI is not interested in an unconfirmed sighting of a man who committed war crimes twenty-five years ago, but Meredith feels a sense of urgency. Especially after someone begins stalking her and threatening her life. If she doesn’t warn the public, who will?

She has done it again! GG Vandagriff’s latest release, Balkan Echo, is a thriller which is hard to put down and kept me on the edge of my seat as I turned page after page. I continue to be amazed at GG’s ability to create drama with unanticipated twists and turns as modern-day history is woven into the plot making it so believable. Her descriptions of people and places bring them to life in a way in which I come to feel that I actually know the characters and have been to the locations. –Amazon Five Star Review